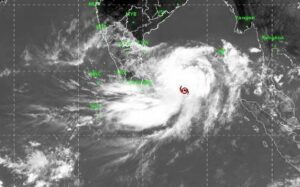 1. Hurricanes, Typhoons and Cyclones are just different names for the same kind of tropical storm that have a low-pressure centre with high wind speeds and heads towards land. The nomenclature depends on which part of the world the storm occurs.

2. Cyclone FANI is named by Bangladesh. It is pronounced “Foni” and loosely translates to “the hood of a snake”.

4. The government has put the NDRF and Coast Guard on high alert in the event the cyclone intensifies into an extremely severe cyclonic storm.

5. The IMD has announced that the storm intensified into an “extremely severe cyclonic storm”.

6. Fishermen have been asked not to venture into the deep sea areas of Bay of Bengal and the Indian Ocean.

7. In the past (1891-2017) only 14 severe tropical cyclones formed in April over the Bay of Bengal. Only one storm crossed the Indian mainland.

8. Cyclone Fani is the second storm forming in April and crossing the mainland. Last severe cyclone Nargis in 2008 devastated Myanmar.

How Well Is India Prepared?

The Extremely Severe Cyclonic Storm ‘FANI’ (pronounced as ‘FONI’) over Westcentral & adjoining Southwest Bay of Bengal, moved northwestwards with a speed of about 10 kmph in last six hours.

Based on the decision of National Crisis Management Committee (NCMC), Ministry of Home Affairs has ordered for the advance release of financial assistance of Rs. 1086 crore to 4 States (i.e. Rs. 200.25 cr for Andhra Pradesh, + Rs. 340.875 cr for Odisha, + Rs. 309.375 cr for Tamil Nadu, + Rs. 235.50 cr for West Bengal), to their State Disaster Response Fund (SDRF) to assist them in undertaking preventive and relief measures in response to cyclonic storm ‘FANI’.

As the cyclone Storm ‘FANI’ intensifies into a Severe Cyclonic Storm over South East and adjoining South West Bay of Bengal and lie about 770 km East-South-East of Chennai at 1730 hrs on 29 Apr 19, the Eastern Naval Command (ENC) has assumed high degree of readiness to render necessary humanitarian assistance. Indian Naval ships at Visakhapatnam and Chennai are standing-by to proceed to the most affected areas to undertake Humanitarian Aid Distress Relief (HADR), evacuation, logistic support including providing medical aid. These ships are embarked with additional divers, doctors, inflatable rubber boats and relief material that include food, tentage, clothes, medicines, blankets etc, in quantities sufficient. Naval aircraft are also standing by at the Naval Air Stations INS Rajali at Arakkonam, Tamilnadu and INS Dega at Visakhapatnam, Andhra Pradesh to undertake reconnaissance, rescue, casualty evacuation and airdrop of relief material to the stranded if required.