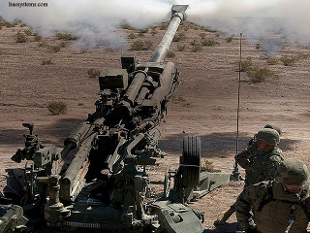 The Defence Acquisition Council (DAC) chaired by Union Defence Minister Manohar Parrikar has given its approval for the purchase of 145 Ultra-Light Howitzers (ULH) guns from the US.

The procurement of ULH will be through the Foreign Military Sales (FMS) route from the US and it will cost around 750 million dollars. As part of this deal, 25 ULH guns will come to India directly from US in a fly away condition. Rest will be assembled in India at the proposed Assembly Integration and Test facility (AITF) for the weapon system in partnership with Mahindra and Mahindra Company.
So let’s do:
1. Expand the term AITF and ULH?
2. Recently, Union Defence Ministry gives nod for purchase of 145 Ultra Light Howitzers guns from which country?