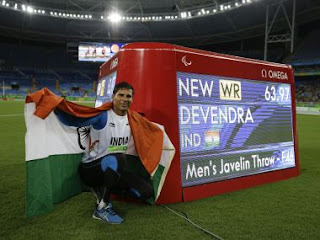 Javelin thrower Devendra Jhajharia became the first Indian to clinch two gold medals at the Paralympics after he broke his own world record to clinch the top honours at the Rio Games.
Devendra won gold in the javelin event at the 2004 Athens Paralympics with a record throw of 62.15 metres, becoming only the second gold medallist at the Paralympics for his country, and improved upon it with an attempt of 63.97 metres at the Olympic Stadium (Engenhao) in Rio. The 36-year-old is currently ranked third in the world.

So let’s discuss some questions related to this post:
1. Name the Javelin thrower, who has became the first Indian to clinch two gold medals at the Paralympics?