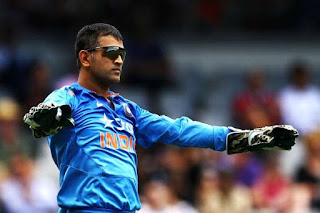 Mahendra Singh Dhoni became the first Indian wicketkeeper and fourth in the world to complete 350 dismissals in One-Day International (ODI) cricket. The Ranchi stumper achieved the feat during the ongoing third and final ODI against Zimbabwe, when he caught Elton Chigumbura off medium pacer Jasprit Bumrah in the 33rd over. Playing in his 278th match, Dhoni has taken 261 catches and effected 89 stumpings. Sri Lankan Kumar Sangakkara leads the list with 482 dismissals followed by Australian Adam Gilchrist and South African Mark Boucher with 472 and 424 dismissals respectively.
Mahendra Singh Dhoni is an Indian cricketer and the current captain of the Indian national cricket team in limited-overs formats. An attacking right-handed middle-order batsman and wicket-keeper, he is widely regarded as one of the greatest finishers in limited-overs cricket. He made his One Day International (ODI) debut in December 2004 against Bangladesh, and played his first Test a year later against Sri Lanka.