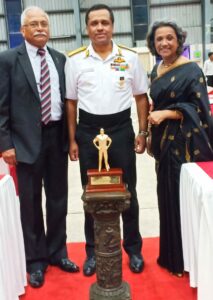 The squadron has flown 14 different types of aircraft starting with the Sea land Aircraft to the Dornier maritime reconnaissance aircraft being presently flown.

The squadron has been part of several operations, from the 1971 Indo-Pak war to Humanitarian Assistance and Disaster Relief (HADR) operations during the December 2004 Tsunami, Cyclone Okhi in 2017 and the 2018 Kerala floods.