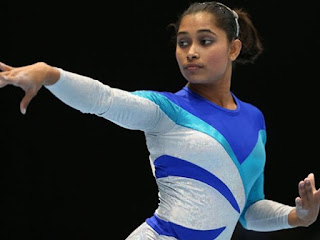 Indian Gymnast Dipa Karmakar created history as she clinched ‘World Class Gymnast’ award by the Federation Internationale de Gymnastique (FIG). She is the first Indian gymnast to secure this award as ‘Gymnaste de Classe Mondaile’ given by FIG. Earlier, she also sparked her name as the first Indian woman gymnast to make it to the Olympics.

Karmakar received the official letter confirming the distinction from FIG. The letter of distinction also carries a special badge, which she will be carrying during the Olympics. FIG decided to honour her following her fine performance in the World artistic gymnastics championships, held in Glasgow between October 24 and November 1, 2015. She ranked fifth in that event in Glasgow.

So let’s do:
1. Name the Indian Gymnast, who created history as she clinched ‘World Class Gymnast’ award by the FIG?