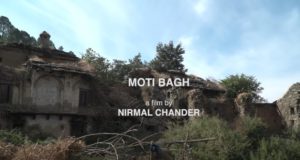 Moti Bagh, a documentary film based on the struggle of a farmer in a remote Uttarakhand village, has been nominated for the Oscars. The film, based on the life of Vidyadutt Sharma, a farmer living in Pauri Garhwal region, also won the 1st prize at the International short film festival in Kerala. This documentary film was directed by Nirmal Chandra Dandriyal.