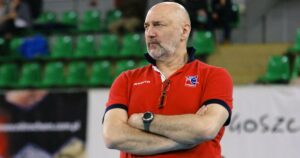 The Volleyball Federation of India appointed Serbian Dragan Mihailovic as head coach of the men’s national team in a move linked to the long term goal of Olympic Games qualification. Mihailovic has more than 25 years of experience as a coach.

The VFI also announced the appointment of Pryemyslaw Gaszyoski and Valadimir Radosevic as the team’s physio trainer and physiotherapist respectively. All the three have been appointed for five months and will work with the team for the Asian Championships scheduled to be held in Iran during September 2019.