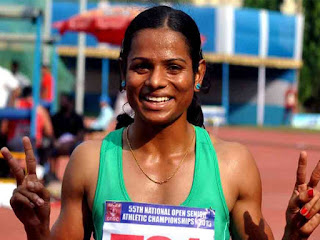 Sprinter Dutee Chand wrote her name in the history as she qualified in the 100 metres category for the forthcoming Rio Olympics. In a mind-blowing run, she met 11.30 seconds target which has created a new national record at 26th G. Kosanov memorial meet in Almaty. The qualifying mark set for the Rio Olympics was set at 11.32 seconds.
Dutee Chand is an Indian professional sprinter. She is currently being supported by the Anglian Medal Hunt Company, a foundation that supports Indian athletes. She is the current national champion in women’s 100 metres event. She is the second Indian women to be ever qualified for the Women’s 100 metres event at the Summer Olympic Games, with PT Usha having qualified for the event in 1980 Summer Olympics.

So let’s do:
1. Name the Sprinter, Who has qualified for Olympics?