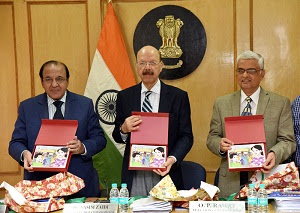 Election Commission of India (ECI) has launched the SVEEP Portal in Hindi language along with two other releases in the sidelines of the Conference of Chief Electoral Officers of States by the Chief Election Commissioner Nasim Zaidi.
The Series of Launches are:
Launch of SVEEP Portal in Hindi
SVEEP Portal is a web based application, accessible to the Chief Electoral Officers and all other stakeholders and serves as a window for easy accessibility of various initiatives of the Commission like NVSP, Online Voter Competition, information on events, best practices, creative content and other resource material.
Launch of Matdaata Mahotsav Document and Film
The Commission launched  Matdata Mahotsav Document and a film on the Matadaata Mahotsav  which was held in Central Park from 14th – 17th January, 2016.The document and the film provided a glimpse into the myriad events that celebrated democracy and underlined the importance of each voter.

Relese of NERP Hand book
The Commission released a Handbook on NERP (National Electoral Rolls Purification) to further improve upon the Electoral Roll and ensure it stays error free in a standardized form.

So let’s do:
1. Name the portals, which have launched by Chief Election Commissioner Nasim Zaidi?