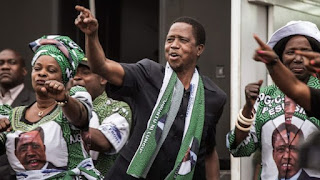 Zambian and Patriotic Front’s (PF) Presidental Candidate Edgar Lungu has won the re-election in a common voting against his main National development Party Rival. Lungu faced a tough challenge from Hakainde Hichilema’s of United Party for National Development (UPND) in a voting campaign.
Lungu, leader of the Patriotic Front (PF), won 50.35 percent of Thursday’s vote, against 47.67 percent for Hichilema, of the United Party for National Development (UPND). The election was fought around the issues of rising unemployment, mine closures, power shortages and soaring food prices which Hichilema, an economist and businessman, blamed on Lungu’s mismanagement.

So let’s do:
1. Name the person, who has  re-elected as President of Zambia?