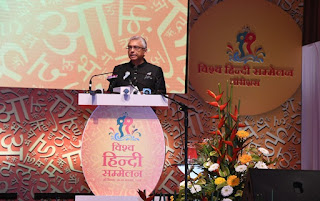 The 11th World Hindi Conference has started in Port Louis the capital of Mauritius. At the beginning of the conference, a two-minute silence was observed to pay tribute to former Prime Minister Atal Bihari Vajpayee. After the inauguration session, a condolence meeting will be held in the memory of former Prime Minister Atal Bihari Vajpayee.
In the afternoon sessions, delegates from 20 countries including India will deliberate on eight sub-topics related to “Hindi World and Indian Culture”.