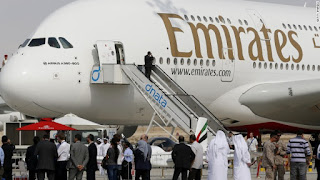 Emirates  launched the world’s shortest scheduled service on an Airbus A380, flying it from Dubai to Doha within 80 minutes.
The 378-kilometre route is the shortest on which an Airbus A380, the world’s largest passenger aircraft, is used. The double-decker aircraft has 14 first class suites, 76 business class flat-bed seats and 429 economy class seats.

So let’s discuss some questions related to this post:
Q1.The world’s shortest scheduled service flying it from dubai to doha within 80 minutes on an Airbus A380 launched by which airline?
Ans1. Dubai based Emirates airline
Source- The Hindu
×