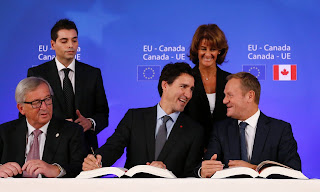 The EU and Canada signed a free trade deal on 31st October 2016 that was almost derailed last week by objections from French-speaking Belgians , exposing the difficulties of securing agreement from 28 member states as Britain prepares for Brexit talks.
Canadian PM Justin Trudeau and top EU officials signed the comprehensive economic and trade agreement, known as Ceta, paving the way for most import duties to be removed early next year. However, the treaty needs the approval of at least 38 national and regional parliaments, including the UK’s, to take full force.
Source- The Guardian
×