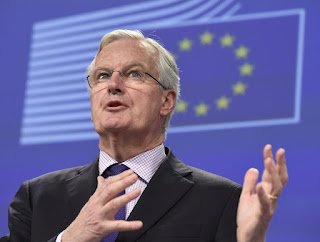 Michel Barnier, a former French government minister and ex-European Commission vice-president has been appointed as Chief Negotiator by the European Commission to negotiate with Britain over Brexit. Barnier was appointed under Article 50 (Withdrawal of a Member State from the EU) of the Treaty on the European Union. He will be a prominent figure in the negotiations over Britain’s exit from the union.
Michel Barnier is a French Union for a Popular Movement (UMP) politician and Vice President of the European People’s Party (EPP). He was appointed Minister for Agriculture and Fisheries in the French government on 18 June 2007. He stepped down from the position on 7 June 2009 after his election as a Member of the European Parliament (MEP).

So let’s do:
1. Name the person, who has been appointed by the European Commission to negotiate with Britain over Brexit?