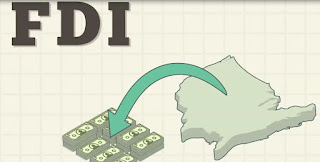 Foreign direct investment (FDI) into the country grew by 37 percent to USD 10.4 billion during the first quarter of the current fiscal. According to the figures of the Department of Industrial Policy and Promotion (DIPP), India had received USD 7.59 billion FDI during April-June 2016-17.
The main sectors which attracted the highest foreign inflows include services, telecom, trading, computer hardware and software and automobile. The bulk of the FDI came in from Singapore, Mauritius, the Netherlands and Japan.