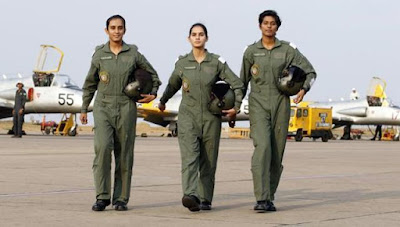 Creating history, the first batch of three female pilots – Avani Chaturvedi, Bhawana Kanth and Mohana Singh were inducted in Indian Air Force fighter squadron. On successful completion of their training, the trio were formally commissioned by Defence Minister Manohar Parrikar. Being the first to break barriers, they were the cynosure of all eyes at the parade in their immaculate turnout. On completion of their Stage III training at Bidar in adjoining Karnataka next year, they will get to fly fighter jets like the Sukhoi and Tejas.

Ms. Avani from Satna in Madhya Pradesh, Ms. Mohana Singh from Jhunjhunu in Rajasthan and Ms. Bhawana Kanth, who hails from Darbhanga in Bihar. The three women who are all in their mid-twenties have already encountered uncertainties and hazards of flying.

In February 2016, President Pranab Mukherjee had announced that all military combat roles will be opened to women in the future. Six female cadets were competing to become fighter pilots after the government, in a landmark move, approved an IAF plan in October to induct them as fighter pilots. However, only three female trainees were selected for the fighter stream.

So let’s do:
1. Name the fighter pilots, who have were inducted in Indian Air Force fighter squadron?