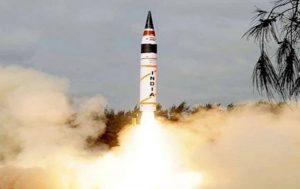 The entire trajectory of the trial was tracked by a battery of sophisticated radars, telemetry observation stations, electro-optic instruments and two naval ships located near the impact point in the down-range area of Bay of Bengal. The test was carried out by the specially formed Strategic Forces Command (SFC) of the Army with logistic support from the Defence Research and Development Organisation (DRDO). The two-stage ballistic missile can carry a payload of 1000 kg over a distance of 2000 km.