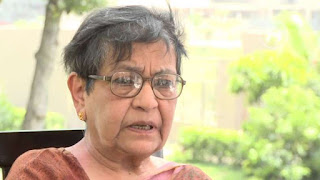 Veteran diplomat Arundhati Ghose, who led the Indian delegation at the Comprehensive Nuclear Test Ban Treaty (CTBT) negotiations in Geneva in 1996, passed away here early  aged 76. Ghose joined the Indian Foreign Service in 1963 and served in various capacities at the Indian embassies in Austria, the Netherlands, and Belgium.
She served as India’s Ambassador to South Korea, Ambassador and Permanent Representative to Unesco; Ambassador to Egypt; Ambassador and Permanent Representative of India to the UN Offices in Geneva; and the Conference on Disarmament.  She was Member/Chairperson, UN Secretary-General’s Advisory Board on Disarmament (1998-2001); and Member of the Union Public Service Commission (1998-2004).

So let’s do:
1. . Name the diplomat, who has passed away recently?