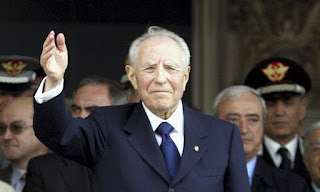 Former Italian president, prime minister and central bank governor Carlo Azeglio Ciampi has died at the age of 95. As treasury minister he is credited with leading Italy into the euro currency.
He also selected the design of the Italian 1-euro coin, Ciampi chose the Vitruvian man of Leonardo da Vinci. Ciampi claimed that he wanted the design to send the message that money was at the service of human kind and not the other way round.

So let’s discuss some questions related to this post:
1. Name the Former Italian president, who has passed away recently?