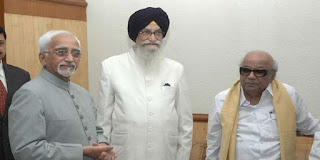 Former Punjab Chief Minister Surjit Singh Barnala, who took over reins of the state in the difficult period when militancy was at its peak in the mid-80s, died in Chandigarh on 14th January 2017 at the age of 91.
Mr. Barnala, who served as Chief Minister from 1985 to 1987, was admitted to the Post-Graduate Institute of Medical Education and Research (PGIMER) in Chandigarh from 12th January 2017.
Source- The Hindu