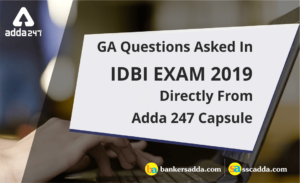 The Exam of IDBI Bank was held recently on 17th May 2019. As per the review by students given to adda247, the GA Portion was quite tough. It was seen in the exam that static GK part was not asked in the exam which was surprising for the aspirants, so weightage of current Affairs section was more. As per the review by students who have taken the exam, we have enlisted following set of questions which were asked directly either from GA Power Capsule or currentaffairs.adda247.com page.