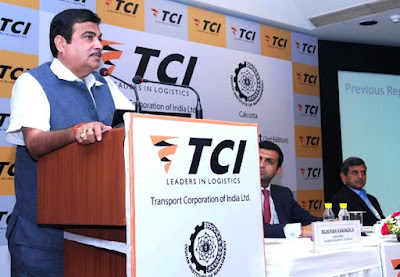 The Minister of Road Transport & Highways and Shipping Nitin Gadkari launched the TCI–IIM Calcutta joint study report on the operational efficiency of freight transportation by road in India in New Delhi. The report is based on a study commissioned by the Transport Corporation of India (TCI), of 28 routes in the country over the period 2014-15.

According to the report, the average journey time and vehicle speed have improved across all the major routes, more needs to be done to reduce stoppage delays as this not only leads to wastage of time but also raises fuel consumption cost. Besides improving the toll collection infrastructure, the number of stops for various other purpose, such as documentation check and tax collection at state borders/check posts and on-road police intervention, should be minimized and the process of document checking and tax collection simplified to facilitate a smooth and seamless flow of goods across the country.
So let’s do:
1. Who is the Minister of Road Transport & Highways and Shipping?
2. Expand the term TCI?