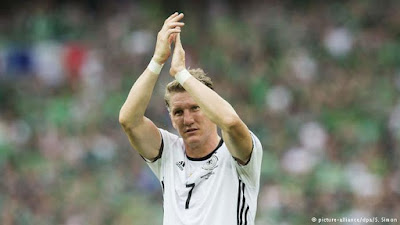 Bastian Schweinsteiger has retired from the German national team, marking the end of a glittering international football career. The 31-year-old midfielder was an instrumental player for Germany when they won the World Cup in 2014, and earned 120 caps for his nation – scoring 24 goals.
Bastian Schweinsteiger is a German professional footballer who plays as a midfielder for English club Manchester United and the German national team. A right-footed player, he usually plays as central midfielder. Earlier in his career, he primarily played as a wide midfielder. On 2 September 2014, Schweinsteiger was named captain of the national team following Philipp Lahm’s international retirement

So let’s do:
1. Name the footballer, who has retired from the German national team?