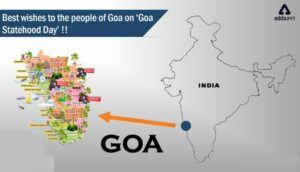 Goa celebrates its statehood day on 30th May. It was on this day in 1987 Goa became the 25th state of the Indian Union.2 It was a Union Territory along with Daman and Diu from December 1961 onwards when Goa was liberated from the colonial rule.

Once Goa was liberated there was a controversy regarding merging Goa with the neighbouring state of Maharashtra or Mysore. However, an opinion poll of 1967 suggested that Goa, Daman, and Diu be Union Territory.

Important Takeaways for SBI PO/Clerk Mains-
1. Pramod Sawant is the 13th and current Chief Minister of Goa.
2. Panaji is the state capital of Goa.
3. Mridula Sinha is present Governor of Goa.