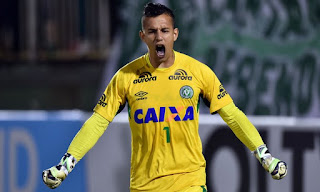 Chapecoense goalkeeper Danilo, who died in the Colombian plane crash, has been posthumously named as Brazil’s player of the year on 12 December 2016.  Danilo’s mother, Ilaides Padilha, collected the award on his behalf at a ceremony in Rio de Janeiro. Danilo, whose last-gasp save in the semi-final helped his side reach the Copa Sudamericana final, got 48% of the fan votes.


So, let’s discuss some questions related to this post:
Q1. Name the player, who has been named as the Brazil’s player of the year 2016?
Ans1. Chapecoense goalkeeper Danilo
Source-The Hindu