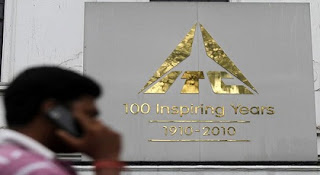 The government has sold two per cent stake in ITC to Life Insurance Corporation of India (LIC) and earned Rs 6,690 crore (around $1 billion) as part of its divestment plan for 2016-17. The stake, held under the so-called Specified Undertaking of the Unit Trust of India (SUUTI), was sold at Rs 275.85 per share through block deals. According to stock exchange data, the stake was picked up by LIC, LIC (Scheme 5) and LIC Allocation Contra Fund.

This is the second SUUTI divestment this financial year. In November 2016, the Centre had divested 1.63 per cent stake in engineering major Larsen & Toubro (L&T) to raise Rs 2,100 crore. State Bank of India (SBI) had picked up shares worth Rs 800 crore in the share sale.
Source- The Business Standard