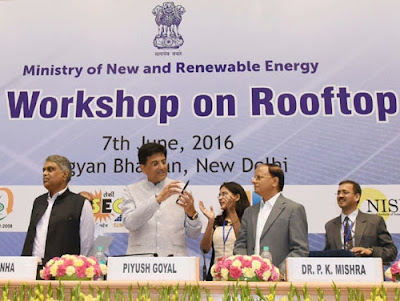 Minister for Power, Coal and New & Renewable Energy Piyush Goyal has launched ‘Surya Mitra’ mobile app at the national workshop on rooftop solar power in New Delhi. The GPS-based mobile app is developed by National Institute of Solar Energy (NISE) which is an autonomous institution of Ministry of New & Renewable Energy (MNRE).
The Surya Mitra mobile app is currently available in Google play store, which can be downloaded and used across India. This app is a high end technology platform which can handle thousands of calls simultaneously and can efficiently monitor all visits of Suryamitra’s. The trained Suryamitra’s who opts for entrepreneurship has joined in the mobile app in several states. These Suryamitras are once again sensitized by NISE on soft skills customer relations management, punctuality and are now ready to deliver the services.

So let’s do:
1. Who is the Minister for Power, Coal and New & Renewable Energy?
2. Name the app, which has launched ‘Surya Mitra’ mobile app at national workshop on rooftop solar power in New Delhi?
3. Expand the terms MNRE and NISE ?
Source – The Hindu