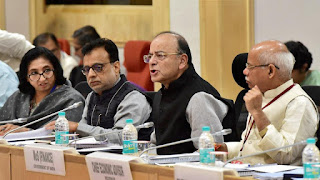 In a major relief to common man, small traders and exporters, the GST Council has reduced tax rates on 27 items and allowed the filing of returns on the quarterly basis. The GST Council meeting held under the Chairmanship of Union Finance Minister Arun Jaitley in New Delhi. The council has decided to reduce the GST rates on dried mangoes, Khakhra, plain chapatis, unbranded Namkeen, unbranded ayurvedic medicines and paper wastes to 5 percent from 12 percent.
Arun Jaitley stated that Food packets used in ICDS scheme, plastic and rubber wastes will now be taxed at 5 percent instead of 18 percent. The GST Council also approved the quarterly filing of returns for businesses with turnover up to 1.5 crore rupees besides raising the threshold for composition scheme from 75 lakh rupees to one crore rupees.
Must Do Takeaways from the above News:
Source- Hindustan Times