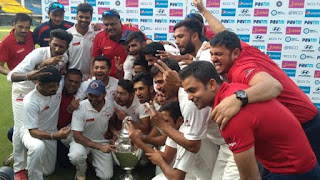 Gujarat won their first ever Ranji Trophy title beating Mumbai by five wickets in the final at the Holkar stadium in Indore. Parthiv Patel’s 143 and Munprit Juneja’s 54 runs helped Gujarat to chase down the highest successful chase in the final at the historic Holkar stadium.
With this title, Gujarat have won the domestic titles in T20, one-day and Ranji. They are only the fourth team to achieve this feat.
Source- The Indian Express