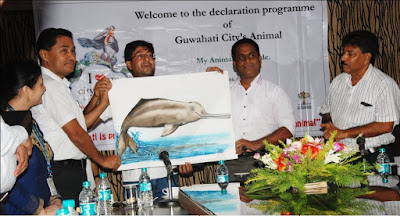 Guwahati became first city in the country to have its own ‘city animal’ with Kamrup metropolitan district administration declaring Gangetic River Dolphin as its mascot on 6 June 2016.Gangetic River Dolphin is locally known as ‘Sihu’ and fewer than 2000 such animals remain in the River Brahmaputra along Guwahati.”