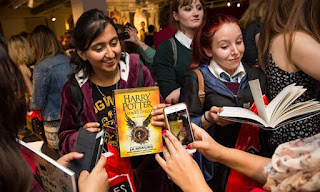 The book based on the script of the play ‘Harry Potter and the Cursed Child’ launched today globally. This is JK Rowling’s eighth Harry Potter story written along with Jack Thorne and John Tiffany. Thorne scripted the two-part play based on the original story, which begins 19 years after ‘Harry Potter and the Deathly Hallows’, which was published in 2007.
Harry Potter is a series of fantasy novels written by British author J. K. Rowling. The novels chronicle the life of a young wizard, Harry Potter, and his friends Hermione Granger and Ron Weasley, all of whom are students at Hogwarts School of Witchcraft and Wizardry. The main story arc concerns Harry’s struggle against Lord Voldemort, a dark wizard who intends to become immortal, overthrow the wizard governing body known as the Ministry of Magic, and subjugate all wizards and non-magical people (Muggles).