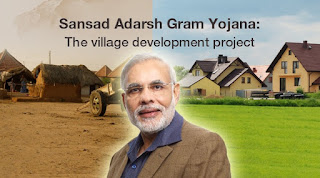 Union Science and Technology Minister Dr. Harsh Vardhan has adopted ‘Dheerpur’ and ‘Ghoga’ villages under the ‘Sansad Adarsh Gram Yojana’ (SAGY). SAGY is one of the major and flagship schemes of PM Modi.

Sansad Adarsh Gram Yojana is a rural development programme broadly focusing upon the development in the villages which includes social development, cultural development and spread motivation among the people on social mobilization of the village community. The programme was launched by the Prime Minister of India, Narendra Modi on the birth anniversary of Jayaprakash Narayan, on 11 October 2014
So let’s discuss some questions related to this post:
1. who is the Union Science and Technology Minister?
2. Expand the term SAGY?
3. Name the villages, which have adopted by Union Science and Technology Minister under the SAGY?
Source – The Hindu