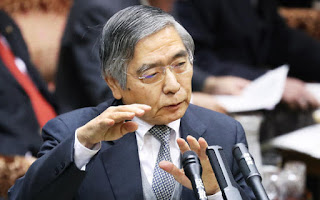 Japan’s government has reappointed Bank of Japan Governor Haruhiko Kuroda for another term and chose an advocate of bolder monetary easing as one of his deputies, a sign the central bank will be in no rush to dial back its massive stimulus program.
The government also submitted to parliament its nomination of Masazumi Wakatabe, a professor at Waseda University and an advocate of aggressive monetary easing, as deputy governor.