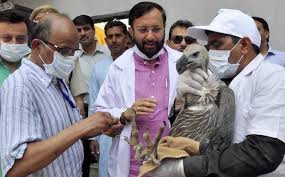 The vultures were released as part of the soft release or reintroduction programme, in a pre-release aviary where they would have an unobstructive view of the surrounding. This would help them in getting used to the habitat in which they would be released in the wild in future. These birds have been wing-tagged and were leg-ringed for identification.

So let’s do:
1. Name the state, which has launched Asia’s first ‘Gyps Vulture Reintroduction Programme’?
Source – The Hindu