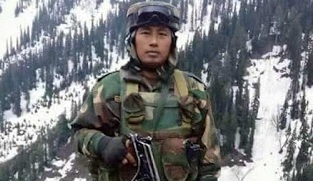 Havildar Hangpan Dada was honoured posthumously, with the government announcing the highest award Ashok Chakra to an army man during peace-time operations on the eve of the Independence Day. He was killed four intruding terrorists before laying down his life at the height of 13,000 feet in the harsh and icy Himalayan range of North Kashmir, that won him the Ashok Chakra.
36-year-old Dada, who laid down his life for the country on May 27 this year, valiantly fought in the treacherous Shamsabari range in North Kashmir eliminating four heavily-armed terrorists who had infiltrated into North Kashmir from Pak-occupied-Kashmir (PoK).

So let’s do:
1. Name the solder, who was honoured posthumously, with the government announcing the highest award Ashok Chakra?
Source – The Hindu