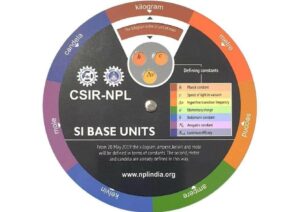 After decades of ground-breaking laboratory works, the world’s scientific and technical community, in a landmark and historic decision has unanimously adopted the resolution to redefine four of the seven base units, the kilogram (SI unit of weight), Kelvin (SI unit of temperature), mole (SI unit of amount of substance), and ampere (SI unit of current).

This decision has now enabled scientists and researchers to base the SI units entirely on fundamental properties of nature, which will ensure their ongoing refinement and improvement for years to come. The fundamental constants are invariants of time and space and successfully replaced the artifact based units, and aptly opened up the new era for quantum world by linking all seven base units to fundamental constants/quantum standards.

The new SI is being implemented worldwide from 20th May 2019 i.e. the World Metrology Day. The World Metrology Day (WMD) is celebrated annually on this very day as the Metre Convention was signed by representatives of seventeen nations on May 20, 1875. On this occasion, CSIR-NPL also published a book entitled, “Redefined SI Units and Glimpses of NPL Metrological Activities” of almost 100 pages.