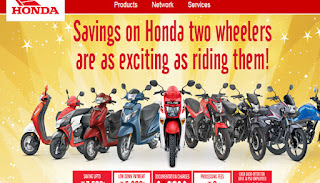 Honda Motorcycle and Scooter India (HMSI) has raced past Bajaj Auto to become the second biggest bike seller in India during the first half of the ongoing fiscal. Market leader Hero MotoCorp continued its hold on the segment selling 33,44,292 units in the first half of the fiscal as against 30,34,504 units in the year-ago period, a growth of 10.2 percent.
During the April-September period this fiscal, HMSI sold a total of 10,48,143 motorcycles in the domestic market registering a growth of 19.8 percent. On the other hand, Bajaj Auto sold 10,10,559 units witnessing a decline of 10.45 percent, according to the latest data from Society of Indian Automobile Manufacturers (SIAM). In the comparable period last fiscal, HMSI sold 8,74,852 units as against Bajaj Auto’s 11,28,425 units.