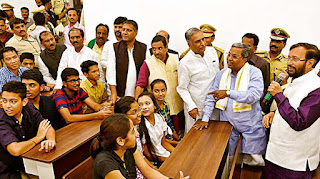 Union HRD Minister Prakash Javadekar formally inaugurated the institute in Dharwad. The inauguration, which was planned last month end, had to be postponed due to the Kalasa Banduri agitation.
Political leaders across parties were present at the inaugural function which was delayed due to ongoing agitations over Kalasa-Banduri issue in North Karnataka. The first batch of IIT-Dharwad began on August 1 with 120 students.