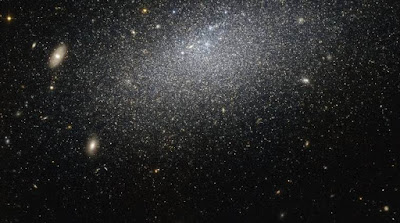 The Hubble Space Telescope has uncovered a mysterious solitary dwarf galaxy – a type that is smaller and messier than its cosmic cousins, lacking the majestic swirl of a spiral or the coherence of an elliptical. This galaxy is known as UGC 4879.

There are about 2.3 million light years between UGC 4879 and its closest neighbor, Leo A, which is about the same distance as that between the Andromeda Galaxy and the Milky Way. Launched in 1990, the Hubble Space Telescope (HST) is a project of international cooperation between NASA and the European Space Agency. Luminati Aerospace successfully tests solar-powered aircraft. This galaxy’s  isolation means that it has not interacted with any surrounding galaxies, making it an ideal laboratory for studying star formation uncomplicated by interactions with other galaxies, the statement added.
So let’s do:

1. Name the Telescope, Which  has uncovered a mysterious solitary dwarf galaxy?