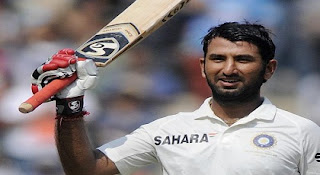 India’s top-order batsman Cheteshwar Pujara added another feather to his cap on the first day of the Hyderabad Test at Rajiv Gandhi International Stadium against Bangladesh. During his knock of 83 runs, Pujara surpassed the 52-year long-standing record of former Indian cricketer Chandu Borde of highest first-class runs in a single cricketing season.
Borde had scored 1604 runs in the 1964-65 season that included runs in Tests as well as first-class matches. When Pujara scored his 83rd run, he eventually surpassed Borde’s record by a run and now has 1605 runs in the season with India still to play 4 more Test matches to play against Australia at home.
Source- The Indian Express