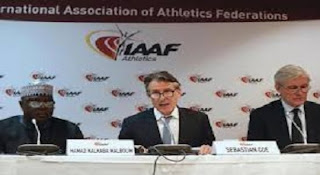 Russia will miss August’s World Athletics Championships in London (UK) after their doping ban was extended, the world governing body president Sebastien Coe said.
Russia has been barred from international competition since November 2015 following a damaging report alleging that state-sponsored doping was rife in the country. The ban had already been extended in March and then June 2016, preventing Russia’s athletes from competing at the Rio Olympics.
Source- The Times of India