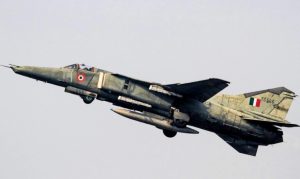 The Indian Air Force bids farewell to the iconic “MiG-27” with a decommissioning ceremony at the Jodhpur air base. The Mig 27 is a soviet origin aircraft that was built under licence by HAL and became a part of the IAF strike fleet in 1985. The jet contributed significantly in wars and peace-keeping operations and also emerged as the real hero in the 1999 Kargil war. It’s contribution in the Kargil war earned it the title ‘Bahadur’.