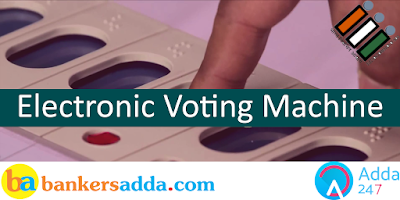 In a huge political upheaval in the country, EVMs were the only things blamed for the defeat. Every party, except the winners, have raised a lot of questions on the sanctity of these machines. Lots of Accusations have been made recently on EVM tampering including elections in Uttar Pradesh and Uttarakhand. EVMs play a vital role in the fate of a candidate and also voters who cast their vote with the hope that it will bring the change that they seek in the country. So it becomes important to retain the faith of voters in the voting system of the country. Though the Election Commission of India has ensured the citizen of India that EVMs are tamper-proof and cent percent reliable. So due to the news on EVMs popping out everyday from everywhere including political parties and the Parliament of India, EVMs might become a hot topic for descriptive papers in NICL AO, Bank Of Baroda PO, SBI PO, Dena Bank PO and other government examinations. So, here are some important facts related to the EVMs that may come handy while writing an Essay on EVMs or who knows, they may ask it on General Awareness section as well.
Some interesting and must know facts on EVM-
1.  An EVM consists of a Control Unit and a Balloting Unit joined together by a cable. The Control Unit belongs to a polling officer while the Balloting Unit is kept in a compartment to cast votes. This basically indicates that unless the polling officer validates your identity, you will not be able to cast a vote.
2. EVMs run on an ordinary 6-volt alkaline battery. EVMs are manufactured by Bharat Electronics Ltd., Bangalore and Electronic Corporation of India Ltd., Hyderabad. Therefore, even in areas with no power connections, EVMs can be used.
3. EVMs can record a maximum of 3840 votes. As normally the total number of electors in a polling station will not exceed 1500, the capacity of EVMs is more than sufficient.
4. The votes in the EVM can be stored for up to 10 years.

5. EVMs manufactured in 1989-90 were used on the experimental basis for the first time in 16 Assembly Constituencies in the States of Madhya Pradesh (5), Rajasthan (5) and NCT of Delhi (6) at the General Elections to the respective Legislative Assemblies held in November 1998.
6. 6. The cost per EVM (One Control Unit, one Balloting Unit, and one battery) was Rs.5,500/- at the time the machines were purchased in 1989-90.
7. EVMs can cater to a maximum of 64 candidates. There is provision for 16 candidates in a Balloting Unit. If the total number of candidates exceeds 16, a second Balloting Unit can be linked parallel to the first Balloting Unit. Similarly, if the total number of candidates exceeds 32, a third Balloting Unit can be attached and if the total number of candidates exceeds 48, a fourth Balloting Unit can be attached to cater to a maximum of 64 candidates.
8. It is possible to use EVMs for simultaneous elections for Parliament and State Legislative Assembly and the existing EVMs have been designed keeping this requirement in view.
9. The most important advantage is that the printing of millions of ballot papers can be dispensed with, as only one ballot paper is required for fixing on the Balloting Unit at each polling station instead of one ballot paper for each individual elector. This results in huge savings by way of cost of paper, printing, transportation, storage and distribution. Secondly, counting is very quick and the result can be declared within 2 to 3 hours as compared to 30-40 hours, on an average, under the conventional system.
10. As soon as a particular button on the Balloting Unit is pressed, the vote is recorded for that particular candidate and the machine gets locked. Even if one presses that button further or any other button, no further vote will be recorded. This way the EVMs ensure the principle of “one man, one vote”.