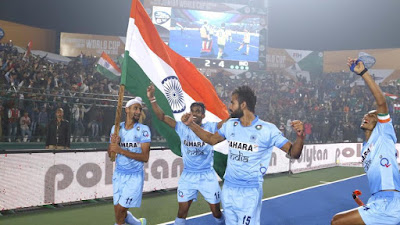 India beat Belgium 2-1 to win the hockey junior World Cup in Lucknow on 18th December 2016. This is India’s second world title.
India are world champions. And they deserved to win the title. India won their first title in 2001 in Hobart, Australia. In 1997, India won silver after losing to Australia in the final in Milton Keynes, England. Belgium win a PC in the dying seconds of the match. Score to make it 1-2.
Source- The Hindustan Times