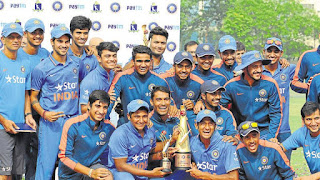 India, coached by Rahul Dravid, continued their dominance in the Asia Cup as they clinched the U-19 title by defeating Sri Lanka in the final at the R Premadasa stadium in Colombo. This was India’s second win in the Asia Cup U-19 tournament, having won the title in 2013/14 by defeating Pakistan by 40 runs and sharing the trophy in the first edition held in Malaysia in 2012/13.
So, let’s discuss some questions related to this post:
Q1. Name the country, Which has won 2016 Asia Cup under-19 title by defeating Sri Lanka?
Answer: India
Source – Business Standard