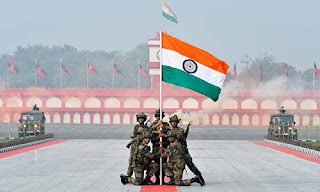 India has outshone Russia, France, Japan and Saudi Arabia in the defence budget and has become world’s 4th largest defence spender . With an expenditure of over 3 lakh crore in 2016, India is now behind the US, China and the UK. Furthermore, by 2018 India will surpass the UK.
So, let’s discuss some questions related to this post:
Q1. Name the country, which has became the world’s 4th largest defence spender in 2016?
Ans1. India
Source-The Hindu