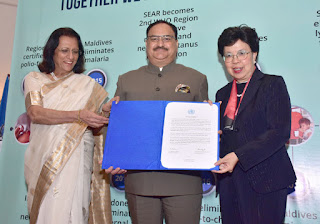 World Health Organization (WHO) has recognized India as the world’s first Yaws-free country and declared it free from maternal and neonatal tetanus.

Union Health Minister J P Nadda tweeted that India received WHO’s certificates for MNTE Yaws-free India at 69th session of Regional Committee of WHO at, Colombo. Nadda received an official citation from the WHO and UNICEF in New Delhi. This achievement will enhance India’s socio-economic status and contribute to India’s wider development.

So let’s do:
1. Who is the Union Health Minister ?
2. Which country has been declared free from Yaws and Maternal and Neonatal Tetanus (MNT) by the World Health Organization (WHO)?