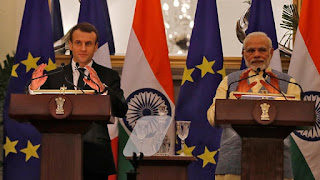 In a major expansion of strategic ties, India and France have inked 14 pacts in key areas of defense, security, nuclear energy and protection of classified information besides resolving to deepen cooperation in the Indo-Pacific region and step up joint efforts to contain terrorism.
The agreements were signed after extensive talks between Prime Minister Narendra Modi and French President Emmanuel Macron, including on the changing security dynamics in the Indian Ocean and Pacific.