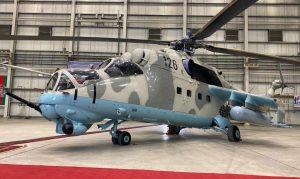 India handed over the second pair of Mi-24V helicopters to war-torn Afghanistan, boosting the capability of the Afghan Air forces. The helicopters were officially handed over by Indian Ambassador Vinay Kumar to Afghanistan’s acting Defence Minister Asadullah Khalid at a ceremony held in the military airport, Kabul.

These helicopters are a replacement for the four attack helicopters previously gifted by India to Afghanistan in 2015 and 2016. The combat performance and offensive firepower that the helicopters provide will increase the effectiveness and efficiency of the Afghan Air Force (AAF) in ensuring that the ANDSF maintain an agile and robust Counter-Terrorism capability.